The Walker is a large and heavily-deformed Thing. The creature appeared in the 2002 video-game The Thing.

The Walkers' appearance is considered to be quite monstrous and grotesque, resembling the Blair-Thing's own appearance. They possess two large claws on both arms and large spider-like legs, and have a human torso attached to their body, presumably the host. Some early forms of Walkers possess two arms with sharp claws and two legs.

Walkers are considerably large and quite fast for their size. All variants also have a strong melee attack. It's best to mostly stay away from them and reduce their health from afar. The head appendage of the Brute Walker, which can spit a paralyzing substance like Spitting Scuttlers, can prove troublesome if the player is ambushed by several Walkers, which are usually escorted by Scuttlers, or can produce Scuttlers themselves with their appendages. Brute and Full Walkers also have an additional melee attack once enough damage is done to them, producing an appendage that can reduce a quarter of the player's health. The best weapons to use against them are the Shotgun and the Machine Gun. Since they are second stage Things, the only way to kill these monstrosities is by incinerating them with a Flamethrower, Blowtorch or Flame Grenade after weakening them with gunfire. The player should beware of the two Scuttlers which are produced once the Walker dies by fire.

The Stun Gun and Flash Grenades is also effective against them: they will stun them for a short while, visible through an animation where the creature will stand still and dazed, for a few seconds. The player can use this short time to attack them.

The Brute Walker is considered to be the first form of the Walker. Like its name suggests, its appearance is quite brutish, hulking and cumbersome, with two large asymmetric and malformed limbs, consisting of arms and legs with sharp claws, a membrane with a hidden appendage and a head with visible eyes and a sideways vertical jaw with sharp teeth. Despite its physical form it possesses remarkable speed and agility. They are endowed with sharp claws on each arm. They have two stages of transformation: after enough damage is done to them, the exposed membrane in their torso will burst bloodily, and a hidden appendage will be available to them to use as a weapon. There are two different variants of this appendage: one variant is an intestine-like appendage that can produce Scuttlers, and another is a retractable claw which produces a devastating melee attack, capable of killing the player in four hits. Like Spitting Scuttlers and Assimilants, Brute Walker variants have a head appendage which can produce the same paralyzing substance as they. There are three physically-different variants: one with a claw-like left arm and a right arm with three claws; one exactly similar, but with a huge sting-shaped blue arm; and a bigger variant with a purple pincer-like right arm and a hulkier, also purple left arm with three claws.

This Walker form is considered to be the form of a fully transformed Walker, although they still have some traits of their earlier form; they have extended claws and arachnid-like limbs, and the tails they drag behind them are actually armless human torsos. They can reach an additional stage of transformation: once enough damage is dealt to them, a head with a visible jaw with sharp teeth emerges from its split head. This head grants them a special attack, where they lunge forward and bite, dealing nearly one quarter in damage of the whole health bar. There are five variants of the Full Walker. One has lean arachnid-like limbs which have a light flesh-like color; another has the exact same features, but a redder skin tone in its limbs; another has larger, malformed blue-colored arms which end in sharp arachnid-like stings; the last one has the bulkiest limbs, with a set of two extended claws on each arm. The fifth variant, the Dog Walker, is mentioned below.

A rare form of the Full Walker. Not to be mistaken with the Dog Beast. Its appearance is quite similar to that of an ordinary type 1 Full Walker mentioned above, except for its head, which resembles a brown dog's, with visible dog ears and two green tubes where its jaws should be. Unfortunately, the "Cerberus" variant with three heads shown in the picture below appears only in the beta version of the game (notice the clothes Blake is wearing, the correct MP5 model for the Machine Gun and also the fact that in the Strata Medical Laboratory there are only one Full Walker and three Brute Walkers). The Dog Walker appears in the Strata Maintenance section, and is unique in the entire game. 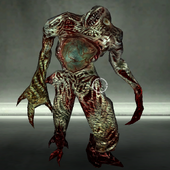 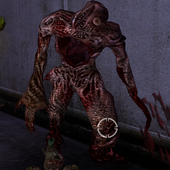 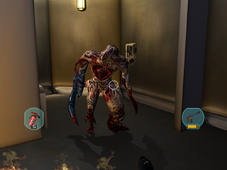 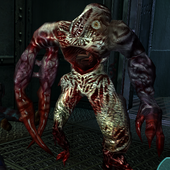 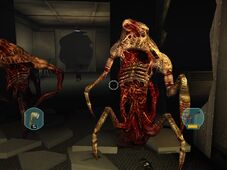 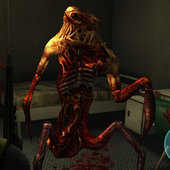 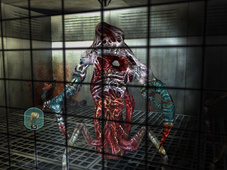 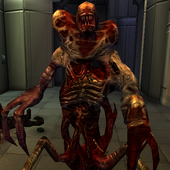 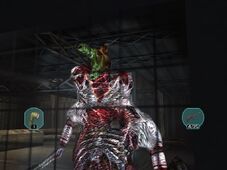 A Brute Walker using its torso appendage to produce Scuttlers.

The "cerberus" variant with three heads (beta-version only).