In the 1982 film The Thing, the outpost is infiltrated by a shape-shifting extraterrestrial being during the winter of 1982, which leads to the demise of almost everyone there. In a desperate bid to prevent the creature from escaping, the remaining survivors decided to destroy the entire outpost. The film ends with the sole survivors - MacReady and Childs sitting alongside the burning wreckage of the station. The fate of the men and the outpost were further explored in the 2002 video-game The Thing and the Dark Horse Comics series The Thing from Another World.

Exterior with helicopter, tractor and entrance, The Thing (1982).

Interior image - the basement and generator room, The Thing (1982).

MacReady returns to the ruins of Outpost 31, The Thing from Another World. (comic).
Add a photo to this gallery

Alternate Design of the Main Building 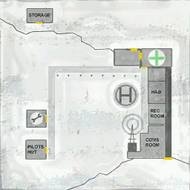 A radically different Outpost 31 layout, as seen in The Thing (video-game).
Add a photo to this gallery
Retrieved from "https://thething.fandom.com/wiki/U.S._Outpost_31?oldid=13037"
Community content is available under CC-BY-SA unless otherwise noted.