Thule Station was a Norwegian Antarctic geological research center which first appears in the 1982 film The Thing. The facility was subsequently featured in the 2011 prequel of the same name, where it serves as the primary setting of the film. It also appears in the 2002 video-game. The station is operated by Norway and is typically manned by a crew of ten men (excluding visiting researchers).

In the winter of 1982, a Norwegian research team discovers a spacecraft and its shape-shifting occupant, which had become buried in the ice for roughly 100,000 years. They take the ice-encased creature back for further studies, whereupon it is accidentally revived, escapes and begins assimilating and killing off the crew. The outpost is eventually destroyed in the ensuing chaos and the two survivors from the camp chase the remaining creature (now imitating an Alaskan Malamute) to a nearby American outpost - U.S. Outpost 31.

Both Norwegians are killed before they could destroy the creature, which is then unwittingly adopted by the crew of the American outpost - leading to a repeat of the Norwegian event. After surmising that the two Norwegians had suffered a mental breakdown, Dr. Copper and helicopter pilot R.J. MacReady travel to the Norwegian camp to offer medical assistance to the remaining eight; only to find it completely destroyed and strewn with debris. Inside, they discover the empty ice-block, research notes, video cassettes and the remains of the crew and creature.

The fate of the men and the Norwegian outpost were further explored in the 2002 video-game The Thing, where a bio-engineering company known as Gen Inc discovers the Thing's existence and establishes a covert test facility underneath a warehouse at the (greatly expanded) outpost's weather station annex. The U.S. Military's Arctic Marines are dispatched by Colonel R.C. Whitley (who is secretly collaborating with Gen Inc) under the pretence of investigating the situation at the two outposts. Alpha Team are sent into the Norwegian outpost, but are ambushed and attacked by the creatures. Scattered and with few survivors, Alpha team is later rescued by their commanding officer, Captain Blake.

According to a map in the films, Thule Station is located within Queen Maud Land, which is claimed by the Kingdom of Norway as a dependent territory. Thule Station lies south of the Thorshavnheiane, a wide plateau with an average elevation of 0 meters above sea level.

The name is technically an error due to the placement of the base in the Antarctic: "Thule" has historically referred to the North pole, not the South.

A map displaying the location of the Norwegian Outpost, The Thing (1982).

A video of the Norwegian research crew marking out their discovery, The Thing (1982).

A video of the Norwegian research crew planting thermite charges, The Thing (1982). 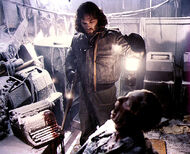 Promotional photograph of R.J. MacReady inside the Norwegian base, The Thing (1982).

The ice block room, as seen in The Thing (video-game). 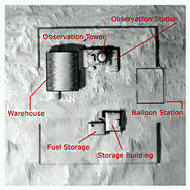 In-game map of the Norwegian weather station annex, The Thing (video-game).
Retrieved from "https://thething.fandom.com/wiki/Thule_Station?oldid=13642"
Community content is available under CC-BY-SA unless otherwise noted.