The Thing from Another World (comic)

The Thing From Another World

In 2011, Dark Horse released a prequel story to coincide with the release of the 2011 prequel film The Thing. Titled The Thing: The Northman Nightmare, the comic is set hundreds of years before the events of the film and tells the tale of how a group of Vikings discover the Thing.

After the destruction of U.S. Outpost 31 by a shape-shifting extraterrestrial creature, survivors MacReady and Childs make it to the Antarctic coastline. The latter attempted to return to the outpost, whilst MacReady is found and picked up by the crew of the Japanese whaling ship, the Misaki Maru, and is restrained following a panicked outburst. After cutting his bonds and quickly making sure he isn't infected, MacReady steals the ship's helicopter and flies back to the remains of Outpost 31, exhausting the helicopter's meagre fuel supply. Knowing that the explosions probably didn't destroy everything in the camp, MacReady quickly sets to destroying the remains of the Blair-Thing, Nauls, Copper and Clark, and is about to destroy the remains of another Thing (apparently the Split Face or Kennel-Thing), but before he can do so is stopped by the arrival of an American military unit, who quickly assume that MacReady went insane, destroyed the outpost and killed everyone there. Before leaving the outpost's remains however, one of the marines, Pybus foolishly touches the remains of the Thing that MacReady was about to destroy.

Minutes later, the team and MacReady are about to be picked up, when Pybus suddenly transforms, slaughters most of the unit and destroys the helicopter, before MacReady and the squad leader, Erskine are able to destroy the Pybus-Thing with a grenade. The two reluctantly agree to team up and drag the two survivors (one of Erskine's squad, and the helicopter pilot) to a nearby Argentinian base. During the journey the marine dies, and then MacReady and Erskine get lost thanks to MacReady giving Erskine misleading directions, which results in a fight between them. Before they can seriously hurt each other however, a team from the Argentinian base arrives, with Childs being among them.

Despite MacReady's worries, he and the other Americans are brought to an isolated part of the Argentinian base, where blood tests can be carried out. MacReady passes his test, as does Childs, but when they go to test the pilot's blood, he suddenly transforms into a Thing, which attacks and begins absorbing the Argentinian doctor, before fleeing toward a nearby ice field. MacReady, Childs, Erskine and the Argentinians pursue it, but are unable to find it, and have to call off the search due to the impending nightfall, despite MacReady's protests. Childs then falls down a crevasse, which turns out to have been created by the now-huge Thing to hide itself in. The team rescue Childs and destroy the Thing with high explosives, before returning to the base.

As Erskine goes off to the communication shack to "report in," MacReady suddenly realizes that Erskine was never actually tested. The two hurriedly follow him, only to find the comms crew dead, and the communication equipment destroyed. MacReady determines from the log that Erskine called an American submarine, and the two chase him down on a snowmobile. MacReady shoots Erskine with his rifle and hits him in the head, but the wound has no effect, proving for certain that Erskine is a Thing. Seconds later, the submarine emerges from underneath the ice, and with its cover blown, the Erskine-Thing becomes completely inhuman, breaks into the submarine and begins slaughtering its crew. MacReady and Childs follow it on-board, but in the confusion the submarine goes into a dive and then collides with an outcropping of rock, badly damaging it.

MacReady explains the situation to the survivors, but they point out that fire cannot be used against the Erskine-Thing since it would, at best, rapidly use up all their oxygen and cause them to suffocate, and at worst trigger an explosion that would cause the submarine's hull to collapse, killing them all instantly. They begin making their way to the submarine's escape pod, but the Erskine-Thing attacks them on the way, and begins assimilating the surviving crewmembers. In a last-ditch effort to drown and kill the Erskin-Thing, Childs blows the submarine's exterior hatch, blasting MacReady out onto the ice fields above, which leaves him alive, but freezing to death, ending the comic on a cliffhanger. 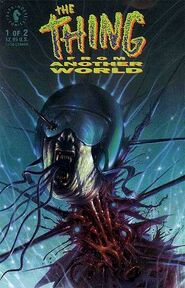 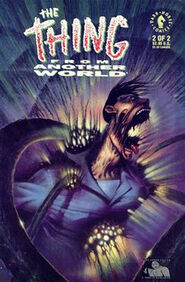 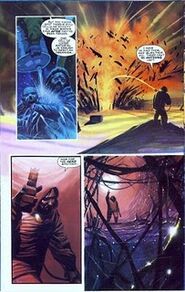 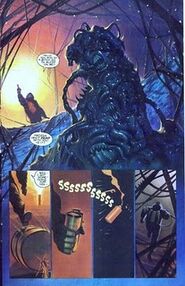 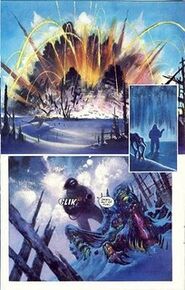 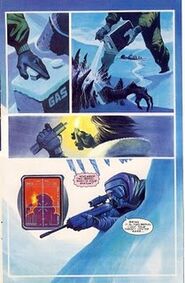