Thing From Another World: Eternal Vows

The Thing from Another World: Climate of Fear

The Thing from Another World: Questionable Research

In the town of Wallace Harbour, New Zealand, several murders have recently taken place. An American fishing boat, the Gettysburg is docked in the harbour and is impounded until the culprit has been found; one of its crew, Simon Powell is making use of this opportunity to spend time in bed with his local girlfriend, Jenny Campbell. Nearby, a bar fight takes place between several locals and the crew of the Gettysburg, and shortly after that an old fisherman is attacked by a mysterious figure which stabs him with long, spiked tentacles. Detective Sergeant Rowan, who has been sent from the mainland to investigate the murders, tries to find the culprit, but arrives only to find the fisherman's mutilated corpse.

The following morning, Jenny is feeling ill, but still goes into her job at a local clothes store. Later that day, Rowan arrives and delivers some devastating news; Powell was found dead near the docks. Jenny collapses on hearing this news, and is allowed to take the rest of the day off. On her way home she nearly collapses again, and reasons that Powell saw whoever murdered the fisherman, and was himself killed.

That night, Jenny is sat alone at home, oblivious to the fact that her appearance is becoming increasingly inhuman. Her pet cat suddenly becomes aggressive and scratches her, and seconds later tentacles erupt from Jenny's body and ensnare and devour the cat. As this happens, Powell's voice fills her mind and tells her that she is no longer human, and must consume other life-forms to survive, as Jenny completes her transformation into the Jenny-Thing.

A little while later, another Gettysburg crewmember, Samuel Holt leaves the bar and comes across the Jenny-Thing, sat alone and crying in an alleyway. He goes to comfort her, but this turns out to be a ploy, and tentacles erupt from her body and stab Holt. However, she's unable to consume him, and it turns out that "Holt" is actually the Powell-Thing, who killed the original Holt and took his form. The two go back to Jenny's apartment, and link minds, with Powell revealing that he was originally part of the Erskine-Thing, which broke off from the rest of its body and became a fish during its escape from the submarine. That fish was then caught by the Gettysburg and assimilated Powell. The Powell-Thing then warns Jenny-Thing to only kill and devour other humans, which she must do every few days to survive, and that assimilating more people will lead to disaster.

At the same time, MacReady arrives in Wallace Harbour, but is almost immediately arrested by Rowan and accused of the murders. However, MacReady has the alibi of only just having arrived on the island, and he brings Rowan and Captain Banks of the Gettysburg up to speed on the Thing; the duo then agree to begin testing of the ship's crew.

The following morning, the Powell-Thing (in Holt's form again) arrives at the Gettysburg, but MacReady and Rowan take him into custody and perform a blood test, indicating that "Holt" is a Thing. Powell-Thing then transforms into a monstrous form and tries to kill the two, but MacReady is able to set it alight with a flamethrower. As the Powell-Thing dies, it briefly takes on the shape all those it's previously infected, including Jenny... who MacReady and Rowan immediately realize wasn't a murder victim, and thus is obviously a Thing.

MacReady and Rowan quickly make their way to Jenny's apartment and try to kill the Jenny-Thing, but she proves too fast and jumps out the window. As Rowan deals with the burning apartment, MacReady gives chase to the Jenny-Thing, who tries to create a distraction by attacking and infecting a local lothario, Julian. Unbeknownst to her however, her plan quickly goes awry as the newly-created Julian-Thing only halfheartedly distracts MacReady, then quickly sets to infecting another local woman. Meanwhile, the Jenny-Thing decides to create an ally by transforming her co-worker, Sharon into a Thing, only for the Sharon-Thing to also turn out to be highly aggressive, resulting in her attacking and infecting the next customer who walks in.

That night, realizing that the Thing contagion is out of control, the Jenny-Thing sets fire to the town to eliminate the competition, and prevent a Thing plague from eventually overrunning all life on Earth. She also damages MacReady's helicopter, and he and Rowan realize that the Gettysburg is their only means of escape.

As they try to make their way through the burning, Thing-infested harbour, MacReady and Rowan come across the Julian-Thing in the process of infecting yet another woman. MacReady quickly torches him, and also the woman once it's clear that she's starting to become a Thing, much to Rowan's horror. The duo are chased across the harbour by a pack of creatures lead by the Sharon-Thing, but find that the Gettysburg has already set sail. Rowan admits that he can't swim well enough to reach the ship, and holds the Things off long enough for MacReady to cover most of the distance to the ship. Out of flamethrower ammo, and with the Sharon-Thing about to assimilate him, Rowan commits suicide by shooting himself in the head.

Aboard the Gettysburg, MacReady finds what appears to be the body of the Jenny-Thing. He realizes that the crew couldn't possibly have killed it using any means that would leave the body intact, and enlists the help of Captain Banks to search the ship. After testing the entire crew, MacReady accuses Banks himself of being the Jenny-Thing and demands that he submit to a blood test; sure enough, Banks transforms into a monstrous form and begins assimilating the crew to gain in size and strength. Unable to help them, MacReady begins pouring gasoline around the ship and setting it alight, and sabotages the ship's boiler.

The Jenny-Thing, which is now a huge monstrosity consisting of several fused bodies, confronts MacReady on the deck, but he ignites the gasoline with a flare gun, causing an explosion which badly damages the Jenny-Thing. Enough remains for the Thing to reform into Jenny's original body, which begs for mercy, but MacReady has none, and he pours gasoline on the Jenny-Thing and sets it alight before jumping overboard. Seconds later the sabotaged boiler explodes, destroying the ship.

As MacReady gets back to the shore, he's suddenly attacked by what remains of the Jenny-Thing, which between the fire and the explosion has been reduced to a small creature reminiscent of the Spider-Head form of the Norris-Thing. However, Jenny-Thing is too badly damaged to assimilate MacReady, who simply kicks it away into the ocean; before he can finish it off however, a large wave knocks him to the beach, where he hits his head on a rock and passes out.

As the dying Jenny-Thing sinks to the bottom of the ocean, the Powell-Thing's voice appears in her mind one last time, telling her that though she is dying, she can survive by transforming into a new form, though doing so will erase Jenny's human memories and identity. After mentally visualising herself with Powell one last time, she transforms into the form that the duo originated as. The new Fish-Thing then joins a shoal of similar fish, with only one thought on it's mind: "Food!" 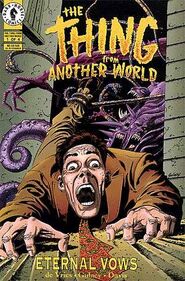 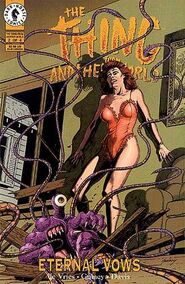 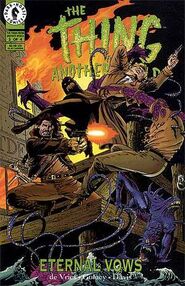 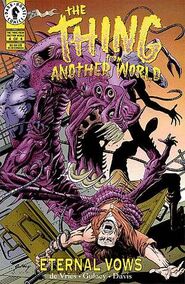 Issue #4
Add a photo to this gallery

Retrieved from "https://thething.fandom.com/wiki/The_Thing_from_Another_World:_Eternal_Vows?oldid=11968"
Community content is available under CC-BY-SA unless otherwise noted.