The Thing from Another World

The Thing from Another World: Eternal Vows

Continuing from the end of the previous story, MacReady is left on the ice, near-dead and suffering severe hypothermia. A team from the Argentinian base, who followed MacReady and Childs after they left, find MacReady and take him back to their base. One of their number then spots a seemingly injured sea lion and goes to aid it, only for the sea lion to turn out to be in the process of assimilation by the Erskine-Thing, who attacks the Argentinian.

Several days later, MacReady wakes up and, much to his alarm, finds himself on a scientific research base in mainland Argentina, commanded by Sgt. Agapito Quitana. The attending doctor, Sabia Viale, explains to MacReady that his hypothermia was so severe that he would not have recovered had he remained in Antarctica, and had to be brought to a warmer climate to recover. MacReady's encounters with the Thing have left him violently paranoid however, and he quickly sets eyes on the flock of sheep kept at the base. That night, the base staff holds a brief meeting over dinner, though it quickly becomes overshadowed by an argument between Agapito and the misanthropic head scientist, Dr. Deseado. Agapito then goes to keep watch on MacReady, who quickly knocks him out, steals his machine gun and slaughters most of the sheep, before Agapito knocks him out with a tranquillizer dart. Agapito orders that the watch on MacReady be doubled, and tells the base's cook, Pablo to butcher whatever useful meat can be taken from the dead sheep.

As Pablo is checking over the sheep carcasses, one of the surviving sheep comes over to him. Pablo notes that this sheep doesn't seem as afraid as the others and goes to pet it, but its wool suddenly engulfs and begins to fuse with Pablo's arm. Hearing his cries for help, the base's staff run outside to see Pablo in the process of being assimilated by the Sheep-Thing, which has now grown to huge proportions (presumably from assimilating the rest of the flock), and rapidly absorbs Pablo into its body. The base's military personnel open fire and seem to injure it, but this turns out to be a ploy, and it devours a soldier who gets too close. As the Sheep-Thing splits into two smaller creatures, Agapito's second-in-command, Ramon tells the rest of the unit that bullets are ineffective, and that they must burn the Things, which is accomplished by having the men dump gasoline on the Things and having Agapito ignite them with a flamethrower. This is sufficient to destroy the two Things, but Dr. Viale points out that since the sheep obviously weren't brought up from the Antarctic, someone else must have infected them.

Over the course of the night, tensions are high between the base's personnel. Dr. Viale tries to test her colleagues, but they refuse to allow her to do so, afraid that she'll falsify the results or subvert the test to infect them. With tensions still high the following morning, another argument breaks out between Agapito and Dr. Deseado, and results in the two coming to blows. Deseado then steals a gun and attempts to shoot Agapito, only to be shot dead by another soldier, Cruz. After consoling him, Agapito tells Cruz to bury Deseado's body, and orders everyone to have some proper sleep.

As the rest of the Argentians sleep, two soldiers are left to watch the base. They see someone who they assume to be a prankster, but actually turns out to be Deseado, who it turns out is a Thing; he attacks and assimilates the two guards. When the remaining personnel wake up, Dr. Viale finds that Agapito has been tied up, and that MacReady has escaped, stolen the flamethrower and torched their communications shack. The soldiers search the base and appear to have tracked down MacReady to a disused aircraft hangar, only to find the enormous and now totally inhuman Deseado-Thing in the process of building an escape craft; it then attacks the Argentinians, fatally impaling one of them on an aeroplane rotor, before MacReady arrives with the flamethrower and torches it. Due to the Deseado-Thing's immense size however, it has time to form its remaining bio-mass into an ape-like Thing which breaks free of the burning body and tries to escape through the jungle.

MacReady chases the Deseado-Thing, and is surprised to see it torched and finally killed by an American commando unit lead by none other than Childs. MacReady leads them back to the Argentinian base, where the Americans restrain the Argentinians for testing. MacReady is first to be tested, only for his blood to suddenly jump out of the dish when Childs applies a flame to it...

Childs prepares to torch MacReady, but Dr. Viale argues with him, pointing out that MacReady was the one who tried to kill the Deseado-Thing. In the midst of the argument, MacReady suddenly remembers that Deseado's "body" was buried by Cruz, who he accuses of being a Thing and immediately torches. Cruz-Thing's head then splits off its body in an attempt to escape, though doesn't get far before the American commandos destroy it altogether. However, the camp's main hut is destroyed in the process, and MacReady escapes.

While hiding in the jungle, MacReady performs a makeshift test on himself to allay his own fears about possibly being a Thing. Meanwhile, the testing continues at the base, proving that Agapito, Dr. Viale and at least two others are not Things. The next-in-line to be tested then suddenly melts into a liquefied mass, which attacks and engulfs one of the Americans. Childs then torches the Liquid-Thing, through burns down another hut in the process, much to the annoyance of the Argentinians.

That night, Agapito remonstrates with Dr. Viale over the fact that they are supposed to be in isolation, and vows to get answers out of Childs with a machete, before leaving. Viale goes to follow him, but comes across MacReady instead. MacReady goes to prove that he's a human, but then Childs shows up. MacReady and Viale are shocked and then horrified when Childs admits that MacReady isn't a Thing... Childs himself is the Thing, and rapidly transforms into a monstrous form.

MacReady and Dr. Viale are chased through the jungle by the Childs-Thing, who is quickly destroyed when they come across the second of the two American commando teams sent to the base. Meanwhile, Agapito enters the main officers' quarters and tries to persuade Ramon to join forces with him; the two shake hands, only for Ramon to suddenly start assimilating Agapito through his arm. In a desperate move, Agapito slices through his own arm with the machete, after which the base's remaining personnel emerge from hiding, and it quickly becomes apparent that apart from MacReady and Viale, Agapito is the last remaining human on the base. Agapito flees, and the Things decide that with his injury, he will no longer be a threat. One of them then packs his body with dynamite, then attacks and blows up the second commando team, with MacReady and Viale only narrowly surviving, though the team commander lives long enough to request that the nearby aircraft carrier that the units deployed from send out a napalm airstrike to completely destroy the base.

MacReady and Viale arrive at the disused hangar, where they find the Things in the process of completing the ship that the Deseado-Thing began work on earlier. MacReady is visibly discouraged, but Agapito catches up with them and despite the loss of his arm, is still intent on destroying the Things. The three pour gasoline around the hangar and ignite it, eventually causing the airplane fuel inside to detonate. Seconds later however, a gigantic spider-like Thing, nearly as big as the hangar itself, emerges from the wreckage and pursues the three. With Agapito rapidly weakening from blood loss, MacReady orders him and Dr. Viale to split up, reasoning that the Spider-Thing will see MacReady as the greater threat and chase him. Sure enough, MacReady lures it back to what's left of the main base, and challenges it to kill him. Before it can do so, the airstrike called in earlier arrives and bombs the Spider-Thing, destroying it and the base. MacReady only narrowly escapes, and meets up with Dr. Viale and Agapito again. Viale asks MacReady if it's over, but MacReady is unable to give her any real answer, and just tells her to focus on keeping Agapito alive until rescue can arrive. 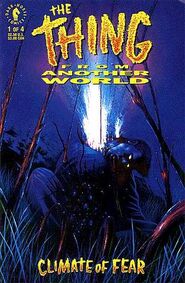 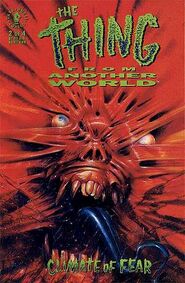 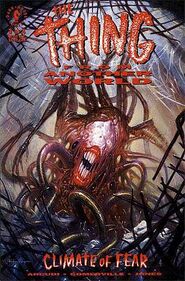 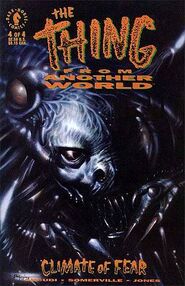 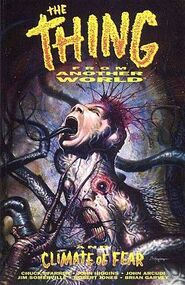 TPB
Add a photo to this gallery

Retrieved from "https://thething.fandom.com/wiki/The_Thing_from_Another_World:_Climate_of_Fear?oldid=10567"
Community content is available under CC-BY-SA unless otherwise noted.