The Thing Wiki is a resource of everything related to the classic 1982 science-fiction film The Thing and its expanded universe. Chronicling every character, creature, location, film, video-game, and literary work, we are compiling information on the entire Thing franchise. We are currently editing over 266 articles, and you can help! 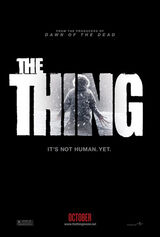 The Thing is a 2011 science fiction horror film directed by Matthijs van Heijningen Jr., written by Eric Heisserer. It is a prequel to the 1982 John Carpenter film of the same name. Matthijs's film takes place right before the first film, and focuses on the original Norwegian crew that discovered the alien. Paleontologist Kate Lloyd (Mary Elizabeth Winstead) joins a Norwegian scientific team that has stumbled across a crashed extraterrestrial spaceship buried in the ice of Antarctica. They discover a creature that seems to have died in the crash eons ago. When an experiment frees the alien from its frozen prison, Kate joins the crew's pilot, Sam Carter (Joel Edgerton), to keep it from killing and imitating them one at a time and potentially reaching civilization. Read More...

Also visit Outpost 31 , one of the oldest The Thing fan websites, founded in October 2001.

Go to these sites for info or for help with your own wiki!

Want your community included? See how!

Retrieved from "https://thething.fandom.com/wiki/The_Thing_Wiki?oldid=11628"
Community content is available under CC-BY-SA unless otherwise noted.