The Thing - The Northman Nightmare

The Thing: The Northman Nightmare

The Thing: The Northman Nightmare is an exclusive digital comic-book published by Dark Horse Comics in September 2011 as part of a promotional tie-in with The Thing (2011). Taking place hundreds of years before the events of the prequel film, the comic tells the origin story of pioneering Norsemen who discover a shape-shifting creature that is hiding in a desolate village with few human survivors.

Taking us into frigid Greenland, the comic introduces us to a group of Norsemen who find themselves caught in a game of survival when they discover a terrifying creature. The shape-shifting monster has the ability to turn itself into a perfect replica of any living being. It can look just like you or me, but inside, it remains inhuman. And it hides somewhere in a desolate village with few human survivors, among them a strange group of women...

The Thing vs the northmen 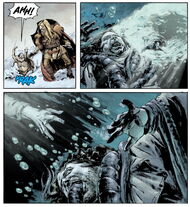