The Thing: Assimilation was a haunted house attraction which first appeared during 2007's 'Halloween Horror Nights' at the Universal Studios® theme park in Orlando, Florida. In 2011, following the release of the prequel film in theatres, HHN Orlando featured a "The Thing" house, and HHN Hollywood held their own version of "The Thing: Assimilation". The attraction utilized a variety of mechanical effects, animatronic puppets and live actors.

Located at the Universal Studios Orlando® theme park, guests walked through Outpost 3113, a military facility where the remains of U.S. Outpost 31 were brought for scientific research. Passing by a large Unimog truck, they entered through a long plastic tunnel that connected the outside world to the sterile environment of the labs. Immediately, the blare of the alarm and flashing lights indicated that all was not well. As they passed through the entryway, they were startled by a shotgun-wielding soldier bursting from his hiding place in a security office locker. He attempted to communicate the danger in the labs through the intercom on the other side of the plexiglass window, but was distracted by something in the hallway behind him. He fired his shotgun at the mysterious creature behind the wall, only for an unseen force to pull him back out of sight.

Guests passed by the frozen bodies of R.J. MacReady and Childs and entered an autopsy lab. The body on the table had burst open, and a massive multi-tentacled organic mass stretched from its chest; beginning to spread across the ceiling. As the body and tentacles twitch and shake, a soldier appears from an alcove and begins firing his assault rifle at it. Guests passed by several doors, which opened to reveal scientists begging for help before being pulled back by tentacles. Passing through another plastic tunnel connecting the labs to the rest of the base, mutated Thing dogs began to push their heads through tears in the plastic and bite at the guests.

In the storage room, a spider-head clung to the fence as an infected scientist reached for the guests. A body pinned to the fence that divided the room in half had a Venus Flytrap-esque growth emerging from its chest, which shook and hissed as they walked by. Proceeding onwards, the rec room seemed empty except for a lone soldier, armed with a pool cue from the nearby table and barricading himself with a vending machine. Suddenly, strobes flashed and a massive Thing with a dog's head growing from its chest appeared from a dark corner. In the larger warehouse, the UFO from Outpost 13 was seen hanging from the ceiling, along with a taller humanoid thing perched on a crate. A soldier appeared from behind a stack of crates and fired at it over the guests' heads. Guests entered a kennel, where the growling and barking of scared dogs could be heard. In the final room, a gigantic Thing had taken over the entire back wall, tentacles and limbs emerging from the mass of flesh. As guests exited, a loud air horn sounded and air blew at the exit door.

Located at the Universal Studios Hollywood® theme park, guests entered to find themselves in the middle of falling snow as they approach Thule Station. Entering through a damaged doorway, they entered the facility's rec room. The lights have gone out, apparently due to power loss, and as they pass by the pool table Jonas appears with a Centipede-Thing attached to his face. Carter appears from behind the bar, his flamethrower sparking as he attempts to get it to work. Passing into the next hallway, strobes flash as an animatronic four-legged fusion of Split Face bursts through a hole in the wall. The second of the Centipede-Things has been pinned to the wall with an axe. An infected Juliette attacks from another room. Through another hole in the wall, Henrik Larsen is seen being impaled by a harpoon-like tendril and pulled into the wall away from the line.

Entering the laboratory, the burned remains of the Original Thing is lying on the table, Henrik's corpse staring out from its autopsied belly. Another infectee appears from a side room and another from behind a filing cabinet, and the Thing on the table heaves. Proceeding onwards, the kitchen seems unoccupied until another Thing bursts through the double doors. Strobes flash as Kate Lloyd appears from her hiding place among the shelves and fires a pistol at it, driving it back. In the radio room, Juliette appears from behind a wall to attack. Colin, unable to handle the stress, slits his throat and sprays blood on the guests.

Continuing into the storeroom, a partially-transformed team member leaps between the shelves and leans down to swipe at the line below him. In the storage room where the original Thing was held, it has broken from its block of ice and clings to the ceiling as Derek Jameson fires a shotgun at it. Another infectee is hidden behind some barrels on the other side of the room. Passing through a short hallway that smells of oil, the guest enters the inside of the crashed UFO that brought the monster to Earth. A massive Thing attacks from a small alcove as Carter attempts to use his flamethrower on it, and the infected Juliette appears for one final scare.

Ride entrance and signage for The Thing: Assimilation (2007).

The frozen body of MacReady in The Thing: Assimilation (2007).

A Thing animatronic from The Thing: Assimilation (2007).

The Thing's shattered ice-block from The Thing: Assimilation (2011). 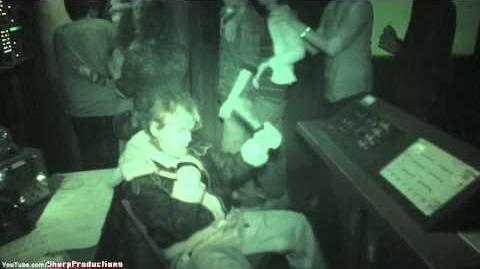 "The Thing" Assimilation Maze (2011) at Universal Studios, Hollywood.
Retrieved from "https://thething.fandom.com/wiki/The_Thing_-_Assimilation?oldid=9481"
Community content is available under CC-BY-SA unless otherwise noted.