Split Face, also known as the Split Face-Thing, the Norwegian-Thing, or the Edvard-Adam-Thing, was a creature which first appeared in the 1982 film The Thing. The monster and its origins were further explored in the 2011 prequel of the same name, where it was revealed to be the fusion of two researchers: Adam Finch and the Edvard-Thing.

The creature is quite emaciated; with little to no body fat left save in the remains of Adam's arm that hang loosely from one of its front arms. Its skin is a mix of Caucasian tinged with grey of the original creature. The overall body appears to have been stretched disproportionately, with the limbs appearing longer than those of a human and closer to insect-like in nature. The hands have been enlarged and thickened, becoming paw-like, while the feet have become elongated, with the beast walking on the toes. Several insectoid limbs exist under the body, helping the creature propel itself along. Compared to other forms of the Thing, the Split Face form was almost completely geared for aggressive attacks against the remaining members of Thule Station.

In the 2011 film, where Matias sees the remains of the Split Face-Thing, notice that the heads are in the opposite form. The left is facing up while the other is placed back, when in the 1982 film, the left is placed back while the right is facing up. Also the Split Face somehow recovered as the skin is back on in the 1982 film while the skin appears to be burned off in the 2011 film. Since the 1982 film reveals that Split Face was not quite dead, one may of course assume that some slow morphing and regeneration happened between the movies.

The Thing starts off by assimilating Edvard Wolner and perfectly imitating him, unbeknownst to the rest of the team. When the Americans break into the main complex, a standoff ensues and Edvard encourages his second in command, Peder, to burn them with his flame thrower. Peder is then shot by Derek Jameson, with the shot puncturing the gas tank on Peder's flame thrower and causing an explosion which renders Edvard unconscious. Since the 1982 movie repeatedly shows Things being vulnerable to dynamite, it is likely that the Edvard-Thing was genuinely knocked out by the blast, not just simulating.

It is possible that the Edvard-Thing in its dazed state lost conscious control over its bodymass, parts of it gaining "independence" and skuttling off on their own, causing a reveal that was not necessarily "intended" by intelligent decision. While the others are carrying the wounded Edvard to the Rec-Room, his left hand breaks off and becomes a centipede creature which attacks Jonas and assimilates him slowly as it attaches itself to his face. Edvard is left on the floor and begins transforming as he sprouts a tentacle appendage from his stomach area which whips around the room aimlessly.

The Edvard-Thing then targets Adam Finch and quickly stabs him in the stomach with its tentacle, presumably to incapacitate its prey. He is then shot, repeatedly, by Derek Jameson. While the bullets are clearly not fatal or even very dangerous to the Thing, the impacts presumably cause some discomfort, and the Thing attacks and mortally wounds Derek by impaling his chest with the tentacle. While Adam lays on the floor pleading for help, the Edvard-Thing targets him once again and retracts its tentacle whip. Adam, at this point, has noticed this and pleads faster and louder as Edvard rapidly mutates into a large quadrapedial beast that contorts with Edvard's stomach turned up and his head hanging downward.

Then it begins to stand up on all its limbs and the new Edvard-Thing then begins to walk, with a disturbing crab/insect like movement, up to Adam and immediately lines up next to Adam's face and forcefully begins the assimilation process. As the Edvard-Thing assimilates Adam, it rolls its own face over Adam's a few times, the flesh morphing over to cover as much skin as possible to fuse the sides together. (It should also be noted that as Adam tried to hold back the Thing with his bare hands, those were already likely fusing to it by then.) This starts the fusing of the faces which gives the newly formed Thing its namesake. The new creature's mouths are now stretched where they meet and Adam howls in pain as Split Face lets out a deafening roar. As the two primordial screams intertwine, the beast flees to finish assimilating Adam at a safer location.

Once assimilation is complete, Split Face returns and starts to stalk the camp for other members of the team. It finds a terrified Dr. Sander Halvorson hiding under a desk and easily assimilates him into a separate Thing. It then looks for the remaining members, and comes across Sam Carter, who is cornered in a storage area by the creature. Sam arms himself with a kitchen knife and prepares for his fate. As Split Face comes around a corner to confront Sam, it starts to express rage upon its two fused faces, and then charges at him in an attempt to assimilate him as well. However at the last moment, a flamethrower being wielded by Kate Lloyd erupts through the room which sets the creature on fire. It charges through the wall of the camp and tries to douse the flames in the cold, damp snow but it is finally killed by a few more blasts of fire from Kate. The creature lets out one last howl as it perishes slowly in the snow.

It should be noted that Kate wanted to roast it further, but Carter told her to stop and she did. As the 1982 movie reveals, this was a mistake; there was still a significant amount of active cells, able to form tentacles and attack Bennings.

When the corpse of Split Face was seen in the 1982 movie, empty cans of kerosene were lying next to it, suggesting it had suffered similar fate to Bennings-Thing. However, according to the 2011 prequel, the kerosene had actually been used to burn the remains of Juliette-Thing and Karl earlier, and it would seem that Split Face simply ended up near the empty cans already lying there.

Near the end, Matias is seen back to the station from refueling his helicopter. Horrified by what he saw upon the remains of the Split Face, he yells out if anyone can hear him, but is confronted by Lars and is proven to be human by him, The two later chased after the assimilated dog in a chopper, which marks the beginning and the doom of Outpost 31.

The Split Face-Thing's partially burned remains were later discovered by R.J. MacReady and Dr. Copper during their investigation at the Norwegian Outpost only to find it destroyed, they also found a large chunk of ice and the records regarding the Norwegian crew's discovery of a UFO. MacReady and Copper brought the remains back to the U.S. Outpost 31 for further examination, the entire crew were in shock to see such a deformed creature, Garry ordered Dr. Blair to run an autopsy on the remains.

During the autopsy with Copper and Fuchs, Blair discovered that the creature possesses what seems to be a normal set of human organs such as Heart, Lungs, Kidneys, Liver, Intestine etc. which originally belonged to its hosts Adam Finch and Edvard Wolner. After the autopsy, the dog imitation that the crew adopted earlier revealed its true form and it began to assimilate the crew's sled dogs. The crew was able to kill it by incinerating it. Blair later conducted an autopsy on the creature and also discovered normal sets of canine internal organs just as similar to the Split Face-Thing, he concludes that they are dealing with an organism capable of perfectly assimilating other life forms.

Split Face's remains along with the Kennel-Thing remains were stored in the storage room by Bennings and Windows; however, parts of the Split Face-Thing were still alive and formed several tentacles, managing to assimilate Bennings. Windows saw what the remains did and ran off to find help. Windows was able to find MacReady and told him what happened, and they went to the storage room but found no signs of Bennings. However, they were able to spot him trying to escape outside; the entire crew surrounded the Bennings replica, and MacReady incinerated it.

Not taking any chances, it was decided that creature's remains had to be destroyed, so they piled up the remains of Split Face, the Kennel-Thing and the Bennings imitation, and completely incinerated them. 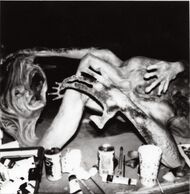 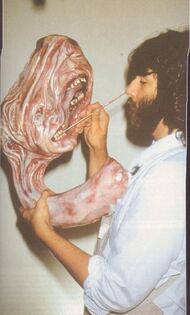 Close up of Split Face