The Pilot Alien was the extraterrestrial pilot of the spacecraft which brought the Thing to Earth. Planned for inclusion in the 2011 film The Thing, the creature was dropped after experiencing a poor reception with test audiences and financial constraints.[1] Although it was replaced with a glowing, geometric hologram in the final cut, the creature can still be seen in pre-production artwork and a fully-functional animatronic puppet was created by Amalgamated Dynamics (ADI).

The Pilot Alien is a member of an Alien pilot race who collected specimens from different planets, a sort of planet zoological expedition, and storing them in containment pods. One of those creatures just happened to be The Thing in disguise, broke free and killed all the Alien species in the ship, probably assimilated one of them. The alien pilots have a biomechanoid appearance, standing at around 12 to 16 feet tall. The head of the creature has three vertically placed eyes with a biomechanoid breathing apparatus running back into the creature's chest. The pilot also has two massive elongated arms which bends backwards towards the creature's back. The pilot seems to control the spacecraft via tubes that are connect to 'bio-ports' on its back which transmits signals to operate the ship.

The arms of the pilot. 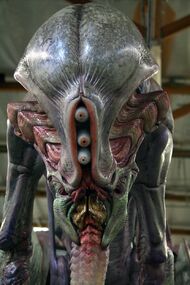 A close-up on the head of the pilot puppet at ADI studio. 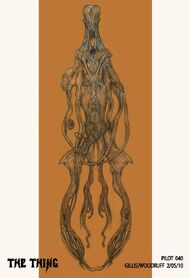 Early concept art of the pilot during the film's pre-production. 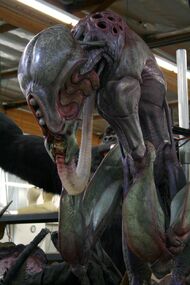 Original puppet of the pilot at ADI Studio.
Add a photo to this gallery

Retrieved from "https://thething.fandom.com/wiki/Pilot_Alien?oldid=10111"
Community content is available under CC-BY-SA unless otherwise noted.