The Palmer-Thing was a Thing which assumed the form of Palmer, an American mechanic stationed at U.S. Outpost 31. The creature appeared in the 1982 film The Thing.

In a bid to determine the identity of the remaining crew of U.S. Outpost 31, R.J. MacReady developed a rudimentary blood-test involving a heated copper wire and samples taken from the men. Noticing how every part of the Norris-Thing had an instinctive desire to survive, MacReady realized that a creature's blood would attempt to flee from a hot needle. Dipping the heated wire into the petri dish containing Palmer's blood, the organism unexpectedly reacted, jumping out of the dish with a shriek. Shocked, MacReady dropped the sample to the ground, where it promptly liquefied and fled.

Its identity exposed, the bound Palmer-Thing then began to violently transform and shed its ropes. Macready attempted to burn the creature, but his flamethrower failed to ignite, allowing the creature to kick off from the floor and latch onto the ceiling. Still struggling to get the flamethrower working, Macready orders Windows to burn it. Windows takes aim, but freezes in fear after it drops to the floor in front of him; giving the creature time to split its head open and wrap a prehensile tongue around the man's throat. Closing its jaws around his head, the Thing violently mauls the radio-operator before throwing him aside. Macready finally gets the flamethrower working again and torches the Palmer-Thing, causing it to break through the rec room wall in a bid to escape. The Thing collapses in the snow outside, where Macready hurls a stick of dynamite at it, finishing it off. 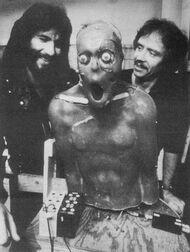 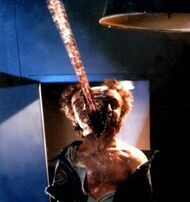 Palmer-Thing destroys a wall in an attempt to escape.
Add a photo to this gallery

Retrieved from "https://thething.fandom.com/wiki/Palmer-Thing?oldid=13051"
Community content is available under CC-BY-SA unless otherwise noted.