The Original-Thing was a Thing which survived the crash-landing of its UFO in Antarctica. The progenitor of all subsequent Things in the Thing film franchise, the creature appears in the 2011 prequel film The Thing.

It was discovered cryogenically frozen in the ice near the crashed remains of its transport. The creature - still encased in a block of ice - was transported to the Thule Station, where lead scientist Sander Halvorson took a tissue sample of the creature using a long drill. It can be assumed that the drill's disruption as well as a new fault area in the ice's integrity both contributed to the Thing's awakening. While the crew celebrated about their new discovery, American helicopter co-pilot Derek Jameson went to view the block of ice and was startled by a comical "BOO" delivered by another Norwegian base member. When Derek turned his back to leave, the creature burst out of its icy prison and escaped through the ceiling of the room.

Derek went back to inform the others that the creature escaped. The team split up into groups and began searching throughout the base for it. While Henrik and Olav were searching, they noticed something under one of the buildings. As Henrik turned around, the Original-Thing attacked, shooting out a spear-like tentacle that impaled Henrik. As it pulled Henrik into it's body, Olav screamed out, alerting the rest of the team. When the others arrived with gas containers, the Original-Thing had already begun to assimilate Henrik. Before it could finish the process, it was set on fire by Carter. The Thing screamed with pain and tried to escape as the fire ravaged the building. It tried to crawl its way out of the building, but it too was engulfed in flames and fell to the ground, dead. The team took the remains of the Original-Thing for an autopsy. It revealed a partly-digested Henrik within the creature's abdominal region, wrapped in an amniotic sac, and this provided the first data about the creature's ability to assimilate and replicate living beings. 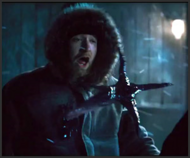