The Machine Gun is the standard squad firearm in the 2002 video game The Thing. The weapon is incorrectly referred to as Machine Gun in-game and in the manual, when it is actually a submachine gun. A machine gun is an automatic weapon designed to sustain continuous fire and fire great amounts of rifle-caliber ammunition, while a submachine gun is a magazine-fed, automatic carbine designed to fire pistol cartridges.

This is a rapid-fire weapon used for CQB (Close Quarters Battle) that can make light work of smaller enemies and slow the advances of larger enemies. The Machine Gun has medium accuracy when used in motion, and will produce a small trust and courage boost when given to a squad member. Blake can carry no more than 9 magazines with a capacity of 50 rounds each, which is surprising considering the Machine Gun has a very short magazine visually, perhaps a 15 or 20-round one.

The Machine Gun's visual design is ambiguous, but it seems to be based on he Heckler & Koch MP5SD1 with its stock removed, a 15-round magazine and without an integrated suppressor.

Machine Gun ammunition crate, as seen in The Thing (2002). Note that the icon displayed is of an MP5.

Another view of the Machine Gun. 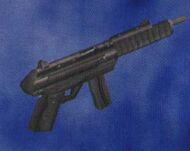 The Machine Gun, as seen in the game's instruction manual. 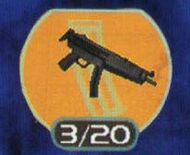 The MP5, as seen in the weapon menu in the beta version of the game. 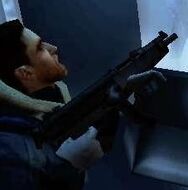 The real MP5, as seen in the beta version of the game.
Add a photo to this gallery

Retrieved from "https://thething.fandom.com/wiki/Machine_Gun?oldid=12309"
Community content is available under CC-BY-SA unless otherwise noted.