One of the survivors from Thule Station

""Get the hell away! That's not a dog, it's some sort of thing! It's imitating a dog, it isn't real! GET AWAY YOU IDIOTS!!""
― Lars attempting to warn the Outpost 31 crew of the Norwegian dog (speaking Norwegian).[src]

Lars was a Norwegian crew-member stationed at the Thule Antarctic research station. The (originally unnamed) character first appeared in the 1982 film The Thing, portrayed by associate producer Larry J. Franco. He was further explored in the 2011 prequel film, this time played by actor Jørgen Langhelle.

Prior to being stationed at Thule Station as a dog handler, Lars was a soldier in the Norwegian Army during the Cold War, and was an expert in the use of grenades, flamethrowers, firearms and the ability to handle himself in dangerous situations. After the Thing infiltrates Thule Station, Lars is one of the few team members who remains calm; he even joins Sam Carter in fighting the original Thing. He is also the only Norwegian crewman who American palaeontologist Kate Lloyd trusts and constantly turns to for help - especially after he destroys the Juliette-Thing and proves he is human by showing her his tooth fillings (as the Thing cannot assimilate inorganic material). After attempting to discover if Sam Carter and Derek Jameson are human (since they were locked in a tool shed after being suspected to be imitations) he is outmanouvered by the men, who lock him in another shack. There he remains while Thule Station is destroyed and most of, if not all, its crew are killed. Later, a Norwegian pilot named Matias lands amongst the ruins and is confronted by Lars who demands that he show him his tooth fillings at gunpoint. Once Lars is convinced that Matias is human they notice the station's Alaskan malamute fleeing from the facility. Lars realizes that the Thing has assimilated the dog and the pair give chase in the helicopter, shooting at it from the air.

Lars first appears in the opening scenes of The Thing (1982), as he and the pilot attempt to hunt and kill the Kennel-Thing. The pair follow it to a U.S. Antarctic research center, U.S. Outpost 31, and failing to shoot or grenade it from the air, land outside the perimeter of the facility. Lars and Matias get out of the chopper, Matias attempts to throw a grenade on Kennel-Thing but it slips from his hand and falls into the snow. Lars tells him to run, Matias tries to reach for the grenade but it explodes, destroys the chopper and kills Matias. Lars gets up and talks with the Americans in Norwegian about the Kennel-Thing but they don't understand. In panic, he starts to shoot at the Kennel-Thing and hits the Bennings's leg. He continues with his attempts to shoot the dog but he is shot by Garry into the eye, killing him instantly. Later his body was dissected by Copper, the physician of the Outpost. 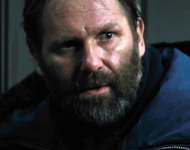 Lars tries to shoot the Dog

Lars's body is being examined by Cooper, which Cooper found nothing wrong with him physiologically.
Add a photo to this gallery
Retrieved from "https://thething.fandom.com/wiki/Lars?oldid=13747"
Community content is available under CC-BY-SA unless otherwise noted.