"It attacks its prey, copies it perfectly and then hides inside it."
― Kate Lloyd, explaining The Thing's life-cycle.[src]

Kate Lloyd was an American palaeontologist temporarily stationed at the Thule Antarctic research station. The character acted as the main protagonist of the 2011 prequel film The Thing and was portrayed by actress Mary Elizabeth Winstead.

A graduate of Columbia University and a Ph.D. candidate in palaeontology, Kate Lloyd was well-known for her work studying the frozen remains of prehistoric finds. For this reason, Adam Finch, a friend of Kate's, recommended her to Dr. Sander Halvorson for a once-in-a-lifetime opportunity to join his research team in Antarctica, where an extraordinary discovery had been made. Despite Halvorson's refusal to detail the nature of the discovery and the requirement that she would have to leave her work behind and journey to Thule Station immediately, Kate is persuaded to take up the offer, joining Adam and several other Americans on a helicopter to Antarctica. Not long after their arrival, Halvorson leads the team to the excavation site through a cavernous opening in a glacier; revealing the nature of their discovery: an alien spacecraft, which crash-landed approximately 100,000 years ago. Blown away by the discovery, Kate is informed of an even more remarkable discovery, and the one for which she had been recruited: the craft's former occupant, frozen under the ice after exiting the vessel. Now equally enticed, Kate directs the excavation of the creature, using a crane to pull out the creature in a single large ice block, which is then brought back to Thule Station.

Once the creature is retrieved, Kate's importance to Sander dwindles as the senior researcher becomes increasingly possessive of the discovery. When Sander orders that a tissue sample be taken for study from the frozen extraterrestrial, Kate objects on safety grounds and the possible damage that might be done to the specimen. Sander, however, overrules Kate's objections and later reprimands her privately for questioning his judgment, making it clear that he did not need her to "think". Kate's misgivings about Halvorson's approach would prove well-placed, as later that evening, while the team celebrates its discovery, the thing escapes from its ice block - attacking a Norwegian researcher and a dog before being incinerated by the team. Its burnt corpse - along with Henrik's partially-digested remains - are subsequently autopsied by Halvorson and Lloyd. To Kate's horror and Halvorson's fascination they find that Henrik was in the process of being absorbed (and replicated) by the organism; with a metal plate used to set one of the man's bones now outside his body. Following the autopsy, Kate takes a sample of Henrik's tissue for further analysis and watching through a microscope, she discovers the Thing's cells predating on Henrik's remaining tissue, consuming it and then imitating it. Based on this discovery and the autopsy, Kate hypothesizes that the thing might be a shape-shifter, able to imitate its prey after consuming it. Kate shared her discovery and observations with her friend Adam who, still shaken by the events of the previous night, was unable to confirm or deny her conclusions.

Shortly thereafter, as helicopter pilot Sam Carter prepares to take the injured and severely traumatised Olav back to civilization, Kate leaves to wash her face in the bathroom. Inside, she discovers blood-covered tooth fillings on the bathroom floor and a shower covered in gore. Realizing that a Thing is still loose and that one or more of her colleagues have been assimilated, Kate rushes to warn the departing helicopter that one of its occupants - Sam, Derek, Olav, or Griggs - may be an imposter. Although Carter is unable to hear Kate, her urgent hand signals convince him to bring the helicopter down. Realising it has been discovered and its escape is foiled, the Griggs-Thing violently reveals itself, causing the helicopter to crash in the subsequent chaos. After the incident, Kate returns to the bathroom to find proof of her claims, only to find the shower recently washed clean. With little else besides her own recollections and some metal tooth fillings, Kate informs the rest of the group of her hypothesis and insists that they quarantine the station. Increasingly impatient with the palaeontologist's apparent hysteria, Wolner and Halvorson accuse Kate of paranoia and Adam, when questioned about her observations of the Thing's cellular activity, is uncertain. As a result, few of the scientists are willing to listen to her and station commander Edvard Wolner continues with his plan to travel to a nearby research station for help.

After everyone else leaves the room, Juliette approaches Kate and informs her that she believes her story and had noticed Colin leaving the shower room with a rag or towel, possibly disposing of Kate's evidence. On Juliette's advice, she follows her into a dark storeroom and begins looking for the outpost's vehicle keys in a bid to prevent the crew from leaving. Unable to find them, Kate turns to find the Juliette-Thing in mid-transformation. Crushing the Thing beneath a large shelf, Kate flees from the storeroom, shouting warnings to the rest of the base and alerting Karl and Lars to the situation. Although Karl is quickly attacked and killed, a flamethrower-wielding Lars arrives in time to burn the creature. Now convinced of Kate's sanity the rest of the group decides to take her advice - quarantining the facility and burning the Thing's remains. Dr. Halvorson offers to develop a blood serum test to determine if a person is an imitation by mixing a suspect's blood with a pure blood sample and observing the reaction. Shortly afterwards, Jameson and Carter emerge unexpectedly from the snow-storm, nearly frozen to death. Although several members of the group are convinced that the two Americans are Things and should be burned immediately, Kate convinces the group to lock them in the tool-shed and await the blood-test.

However, the lab bursts into flames shortly after Halvorson and Adam begin working on their project, leaving no chance for the test's implementation. Tempers flare immediately, with both Adam and Halvorson being accused of sabotaging the lab. Attempting to restore order, Kate improvises a simpler, if less certain test. From her earlier observations that the Thing is unable to absorb and imitate inorganic materials, she theorizes that an individual may be human if they still have their metal tooth fillings. Kate demonstrates the technique on herself first, showing her fillings and then vets the remaining members of the group, narrowing down the number of suspected Things to Adam, Halvorson, Wolner, and Colin. As tensions run high between those who have passed the test and those who have not, Kate, through Peder's translation, instructs Lars and Jonas to retrieve Jameson and Carter from the tool-shed so they too can be subjected to the test. Shortly thereafter, Carter and Jameson break into the main building armed with Lars' flamethrower and the group rushes to head the duo off. During the altercation, Jameson shoots Peder and violently ruptures his flamethrower tank, throwing Edvard against the wall. As they carry the injured man back to the rec room, the Edvard-Thing transforms, killing Jonas and Derek before merging with Adam to become a new split-faced Thing. After failing to torch the creature, chaos erupts and the remaining survivors, Kate included, scatter in an attempt to survive on their own. Kate and Carter stick together for a time, searching the station for the thing. Shortly after the station's power is cut off, Kate and Carter hear Sander yelling from a distance as he is violently assimilated by the thing. They fight off the merged Edvard-Adam thing and its various offspring before Carter is briefly separated and trapped in the kitchen. Fortunately for Carter, Kate arrives in time to torch the merged thing, driving it through the base's wall and into the snow.

Kate and Carter are at first relieved, hesitantly wondering if the ordeal is over, before noticing the newly-assimilated Halvorson departing in one of the base's snowcats. Deducing his destination, the pair follow the creature to the UFO crash site and attempt to board the vessel. Following the activation of the spacecraft, the two become separated, with Kate falling into one of the craft's vents and Carter proceeding through the main hatch. After awaking from the fall, Lloyd finds herself within the alien ship's exotic interior, surrounded by advanced technology and foreboding architecture. She explores the ship for a few more minutes, finding what appears to be the control center, before she is suddenly attacked by the Sander-Thing. Hiding in a narrow conduit, she barely manages to stay out of its reach, and when it finally catches her, she hurls a live grenade into its waiting mouth. After a timely reunion with Carter, the pair narrowly escape the resulting chain-reaction of explosions and make it back to the snowcat. With Kate unsure of what to do next, Carter suggests that they make for a nearby Russian outpost approximately fifty miles away. As they are prepare to leave, Kate notices that Carter is missing his left earring and determines that he is a Thing. Deceptively indicating that she is going to put the flamethrower in the snowcat's back, Kate gets out of the vehicle and explains how she had recognized him as human after his return from the helicopter crash. The Carter-Thing, confused, reaches for its right ear, further confirming Kate's suspicions and, over the his protests she proceeds to burn the snowcat and the Thing within it, preventing its escape. Now stranded and truly alone, Kate climbs into Halvorson's snowcat and stares blankly into the night. 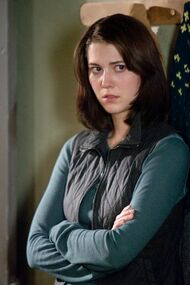 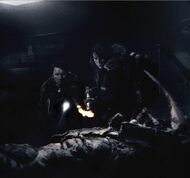 Kate and Carter vs the Thing

Retrieved from "https://thething.fandom.com/wiki/Kate_Lloyd?oldid=13607"
Community content is available under CC-BY-SA unless otherwise noted.