Assimilates victims with its wool,
Victims embedded in its body,
Splits into two smaller creatures.

The Josito-Thing was a Thing which assumed the form of one of the Tierra del Fuego research station's sheep. The creature appeared in the 1992 comic-book The Thing from Another World: Climate of Fear.

At least one of the flock of sheep, affectionately named Josito, kept at the Tierra del Fuego research station was infected by another, unidentified Thing assimilant. Subsequently, the crazed and paranoid R.J. MacReady slaughtered most of the flock upon his arrival, correctly believing that one of their number was infected, though failed to actually kill the infected sheep. After MacReady was tranquilized and taken away, station commander Agapito Quitana ordered the cook, Pablo to butcher whatever meat was still usable from the dead sheep. As he was doing so, the infected Josito approached him, and Pablo went to pet it, only for its wool to suddenly engulf and begin fusing with Pablo's right arm.

Pablo tried to free himself by shooting at the Josito-Thing, which rapidly grew in size to a mixture of vaguely sheep, humanoid and serpent-like features, likely absorbing the other sheep in the process - but was unable to do so, though his efforts at least attracted the attention of Agapito and the other soldiers, who watched helplessly as Pablo's body was fully absorbed into the Josito-Thing, leaving only his head and left arm visible. Agapito ordered his men to shoot at the Josito-Thing's head, which appeared to disable it, despite Agapito's second-in-command Ramon warning him that this would not be an effective tactic. Sure enough, a tentacle emerged from the mouth of what remained of Pablo, and ensnared a soldier who got too close, before Pablo's head distended itself out of shape to devour the soldier.

After this, the Josito-Thing split into two smaller Things: one with a long, serpent-like body, and a large, blob-like Thing covered in tentacles that ended in mouths filled with razor-sharp teeth. Finally heeding Ramon's warnings that fire was the only effective weapon, the soldiers covered the two Things with gasoline, which Agapito ignited with a flamethrower, killing the Things. Before it died however, a human mouth emerged from one of the Things and called for help in Pablo's voice, unnerving his former colleagues.

The Josito-Thing assimilates Pablo, as seen in Climate of Fear, Issue 1. 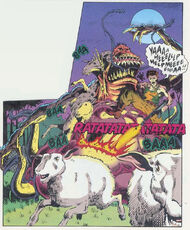 The Josito-Thing reveals itself. As seen in Climate of Fear, Issue 1.

The Josito-Thing splits into two creatures. As seen in Climate of Fear, Issue 1.

The Josito-Thing crying for help right before its death, as seen in Climate of Fear, Issue 1.
Add a photo to this gallery

Retrieved from "https://thething.fandom.com/wiki/Josito-Thing?oldid=12779"
Community content is available under CC-BY-SA unless otherwise noted.