Perfectly replicates its victim,
Capable of radically altering form,
Every part is a potentially autonomous creature.

""If I was an imitation, a perfect imitation, how would you know if it was really me?""
― Childs to R.J. MacReady

An imitation is a Thing which has perfectly assumed the form of a victim. Imitation creatures first appeared in the short-story Who Goes There?, which forms the basis for John Carpenter's 1982 film The Thing. The mode of assimilating other life-forms has been a staple across the film, literary and video-game series. They are the most common types of Thing that's encountered throughout the series.

Before a Thing can create an imitation or shapeshift into one, it must first assimilate an organism, which it can do in two ways. Either by attacking and consuming a target, which it will then presumably seperate from itself and produce an imitation. In this scenario, the imitation is brand new and may lack some of physical flaws caused by wear and tear from life experience such as teeth that needed fillings or bones than need plates. Alternatively, the thing can create an imitation by simply injuring and/or infecting an organism, which will then allow the introduced thing cells to assimilate its host from within. The latter being an advantage as it would not need to create a violent situation where blood and ripped clothes can be found, and since the host is assimilated from within, inorganic material such as fillings and plates would presumably remain a part of the imitation as it is not grown brand new.

An imitation perfectly copies its assimilated victim's form; replicating all that the host possessed, such as internal/external physical appearance, mannerisms, voice, and even physical disorders. When threatened or preparing to assimilate another organism, the creature violently bursts open and attacks with a variety of strange and terrifying assemblages - often taken from previously assimilated anatomy. Every part of the imitation (even down to the cellular level) is an individual organism and possesses an instinctive desire to survive. Consequently, when faced with insurmountable odds, an imitation is capable splitting into multiple, albeit smaller, creatures formed from the severed body parts of the whole. Primarily intent on remaining hidden, the imitation's only concern is for its own self-preservation, and will even allow its own kind to be destroyed without remorse as seen in the case of Palmer and Norris. When disguised, the Thing comes across as highly intelligent, as it is convincing in its deception and is capable of sabotage, and even capable of building a ufo. However, upon discovery or when it reveals itself, it seems to revert to pure animalistic instinct as it makes no attempt at communication and exhibits only extreme violance and will attack any living organism it sees, alternatively, it will flee if its prey is armed.

in the 2002 video game, NPCs that are already full Imitations have tells that might clue the player in: some don't belong to the class they're supposed to represent (a Soldier wearing a Medic's outfit, for instance) and some don't even speak at all, behaving very strangely (like the Bennings-Thing). Imitations are smart, and will remain hidden and even attack other Things so as to not alert the squad, but will reveal themselves if the player is left alone with them and other Things. Most Imitations will usually reveal themselves to the player immediately upon encountering them, though.

The film, literary and video-game series has outlined several methods of distinguishing an imitation from an original creature, based around either blood-testing or searching for missing inorganic components (for example, tooth fillings or prosthetics). However, as Sander stated, there are numerous variables to consider, namely that if someone was infected rather than absorbed, then inorganic material may remain as the body is not outwardly changed or grown brand new.

Blood tests work by coercing autonomous Thing cells (imitating blood cells) to act in self-preservation - for example, crawling away from a hot needle. Another blood test variant is the blood serum test, where a suspected imitation's blood is mixed with uncontaminated blood; which will hypothetically react if the creature is an imposter. The 2002 video-game, The Thing, adds a further method of testing in the blood test hypo - a portable blood testing device which exposes a suspect's blood to a caustic chemical agent. Once exposed, the creature will invariably attempt to defend itself, mutating various appendages for the task. Like any of the Thing's forms, incineration is required in order to completely kill it. Utilizing explosives or delivering powerful electric shocks are also effective (especially in the original short story).

Bennings-Thing, discovered by the outpost crew, The Thing (1982). 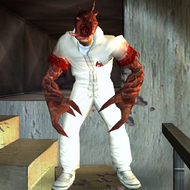 A former medic reveals itself to be an imposter, The Thing (2002). 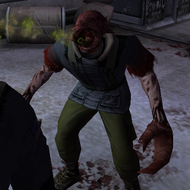 A Thing imitating Arctic Marine engineer Pace, The Thing (2002).
Add a photo to this gallery

Retrieved from "https://thething.fandom.com/wiki/Imitation?oldid=12674"
Community content is available under CC-BY-SA unless otherwise noted.