Grotesque appearance,
Possesses two unique perspective arms,
Possesses an exposed torso of its assimilated host,
Possesses a tentacle on the center of its body

The Hangar Rupture, or the Iversen-Thing, is an advanced form of Rupture that was created after Iversen, a Norwegian Radio Operator, was assimilated by the Thing in the Norwegian Research Center. It served as the first boss of the 2002 video game The Thing.

After being assimilated at the Norwegian Research Center, Iversen emerged out of his hiding spot after Blake and his team fended off a wave of Thing beasts. Iversen ran away and locked himself in the warehouse at the Pyron Hangar. He eventually mutates into a large grotesque creature and is discovered by Blake, but it was destroyed by him using his Military grade arsenals.

When the introduction cutscene stops, pull back to the right because the boss will strike very quickly. The objective is to kill the boss so the Junction Box to the left may be repaired to open the door into the following area. There is a switch to the right side of the room which activates some fumes that will temporarily stun the boss (it can also be stunned with your Stun Gun).

Begin by standing back away from the Rupture and attack it with firearms, shooting at its base and its upper part. Auto-aiming is the best way to do this. Destroy all the crates on the floor and you will discover some flame grenades. The boss will attempt to destroy some of the objects, like the fume switch and the box that powers the light in the room. If it breaks the wall to the left side of the room, it will reveal a Scuttler Pod. Burn it from around the corner using the first-person view. This way the Scuttlers will not annoy you. Keep shooting at the boss until a cutscene reveals the human torso of Iversen, the Norwegian Radio Operator.

The Rupture now has the ability to shoot a paralyzing venom out of Iversen's arm, and it will continue to try and destroy the electrical boxes powering the fume switch and the power to the room's light if it hasn't already. Some Tentacles will spring from the grate to your left at the other corner of the room, but don't worry, they can't hit you, so shoot them until they are killed off. When all threats are removed and you've destroyed all the targets go to your vantage point and keep shooting at all marked targets on the boss, and use a flame weapon to finish it off.

Alternatively, you can just go to the Junction Box and repair it, withstanding the creature's attacks and using health packs until the door opens. 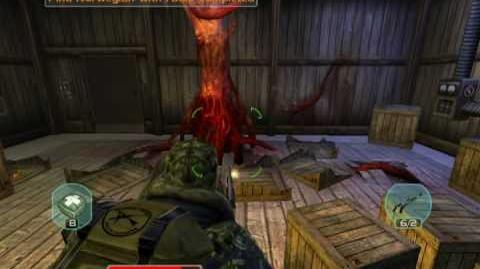 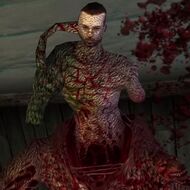