The Furnace Rupture is a form of Rupture that was encountered in the Strata Furnace. It served as the second boss of the 2002 video game The Thing.

After Blake gained back consciousness after being sedated by Whitley, he manage to get several staff members of the facility to affiliate with him in order to survive. Together, they fought off both the escaped Thing beasts and Whitley's Black Ops that were guarding the entire facility. Eventually they reached the facility's basement. Blake entered the furnace room in order to be able to proceed further in the facility, however, he discovered a large, fearsome creature inhabiting the room. Blake fixed a nearby junction box and used the electricity as an advantage to stun the creature. The Furnace Thing was then destroyed and Blake gained access to the next room after pushing the switch behind the creature's remains, but he discovered a time bomb rigged to explode. He manage to escape via elevator and reached the surface, while the rest of the research facility was completely destroyed in the explosion.

A cutscene will introduce you to the boss. Don't go charging in, as it can cause a lot of damage. First, fix the Junction Box to the winch power supply. Then, go back to the door and peer over the lowest crates. The crates have a low spot in them. Use the strongest grenade you have and begin tossing them over the crates to the boss. You might have to do this in the first-person view to toss them accurately. Be sure you throw them far enough because if they bounce back you will take a lot of damage. If they were properly thrown its life should turn red. Run out into the boss' area equipped with the flame grenades and hit the switch to give it a shock. When stunned, hit it in its upper part with a flame grenade using the first-person view. One flame grenade should kill it if it was damaged enough. 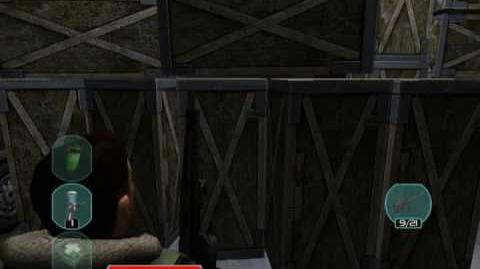 The Thing PC 2d Boos
Add a photo to this gallery

Retrieved from "https://thething.fandom.com/wiki/Furnace_Rupture?oldid=12652"
Community content is available under CC-BY-SA unless otherwise noted.