Deceased, believed to have committed suicide by self-immolation.

"Who's that?"
― Fuchs to a mysterious shadow

Fuchs was an assistant biologist stationed at American Antarctic research station, U.S. Outpost 31. The character appears in the 1982 film The Thing and was portrayed by actor Joel Polis.

During the winter of 1982, a group of Norwegians chased a shape-shifting extraterrestrial organism (imitating an Alaskan Malamute) from their ruined research station to U.S. Outpost 31. After the Norwegians get themselves killed and accidentally destroy their helicopter, Fuchs and others rush outside to extinguish the blaze. The men carry the Norwegian to the rec room, while Fuchs flicks through notes on the Norwegian camp. Several hours later, as evening fell, Dr. Copper and helicopter pilot R.J. MacReady return from their investigation of the Norwegian camp with the charred remains of a split-faced creature - which all present, including Fuchs, stare at in disgust. An autopsy of the cadaver by Blair and Fuchs is inconclusive, save to find that the creature had what appeared to be a normal set of human internal organs.

During the night, the men were woke by the building's fire alarm, triggered by MacReady after hearing the disturbance in the dog kennels. Quickly dressing and heading to the kennels with the other men, Fuchs witnesses the dog-thing assimilating the outpost's sled dogs. After the creature is incinerated, tests are performed by Blair, with Fuchs assisting. Following the autopsy, Dr. Copper decides to lock the remains in the storage room. As Bennings and Windows move the Things into the store and MacReady collects his belongings, Fuchs urgently persuades the pilot to speak with him in the snowcat (despite it being minus forty outside). He expresses his concern for Blair, who has locked himself in his room after running infection projections on the lab computer. Taking the doctor's notes from the lab, Fuchs explains to MacReady that there is still cellular activity in the burnt Thing remains - they are still alive. The two agree to resolve the matter by meeting at Blair's room with Copper and Garry.

Just as they are leaving the snowcat Windows informs them that the creature has attacked Bennings and the three men run to the store room, to find a half-finished imitation of Bennings staggering away from the camp. After the creature and its remains are burned, Fuchs returns from checking on Blair and informs MacReady he is missing. Shortly afterwards, he assists the men in overpowering a revolver-wielding Blair, who has destroyed the outpost's helicopter, snowcat, radio and killed the remaining sled dogs, under the pretences of preventing the Thing from escaping. After locking him in the tool shed, the men return to the infirmary to find the blood locker has been opened and its contents destroyed - preventing a possible blood serum test. Paranoia breaks out as Garry and Copper are accused of sabotaging the supplies. As MacReady takes command of the group, he sends Garry, Copper and Clark to be incarcerated in the rec room and orders Fuchs to develop a new blood test - something he is initially reluctant to do without Copper's help. Approximately forty eight hours into the storm, a power failure occurs in the lab where Fuchs is busy researching; startled by an unknown individual lurking around the area, he follows the man outside where he finds a pair of shredded longjohns bearing the name-tag 'MacReady'. Over an hour later, the rest of the men assemble to search for him - discovering a severely burned body in the snow, the only distinguishable feature of which is a pair of spectacles. MacReady speculates that Fuchs used a flare to burn himself before the Thing could get to him.

Fuchs was one of the leading scientists and was a smart and very observant man, as he was able to deduct facts about The Thing almost as quickly as Blair was. He was deeply trusting of Copper and MacReady and began to lose hope after Blair lost his grip and Copper was taken prisoner. He still pushed himself to continue, however, but his faith in Outpost 31 and his own life appeared to have been completely lost upon the discovery that MacReady could've been assimilated. 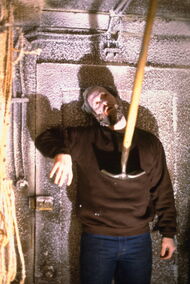 Fuchs impaled by shovel.
Add a photo to this gallery
Retrieved from "https://thething.fandom.com/wiki/Fuchs?oldid=13644"
Community content is available under CC-BY-SA unless otherwise noted.