The Escobar-Thing was a Thing which assumed the form of Escobar, an Argentine soldier stationed at the Tierra del Fuego military base. The creature appeared in the 1992 comic series The Thing From Another World: Climate of Fear.

After the Tierra del Fuego military base is compromised by the Thing an American commando unit lead by Childs restrains the Argentinians for blood testing. During the testing, the next-in-line to be tested (Escobar) suddenly melts into a liquefied mass, which attacks and engulfs one of the Americans. Childs then torches the creature, though he burns down another hut in the process, much to the annoyance of the Argentinians. 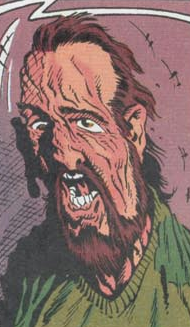 The Escobar-Thing transforming, as seen in Issue 3.

The Escobar-Thing takes form. As seen in Climate of Fear, Issue 3.
Add a photo to this gallery
Retrieved from "https://thething.fandom.com/wiki/Escobar-Thing?oldid=10915"
Community content is available under CC-BY-SA unless otherwise noted.