The Erskine-Thing was a Thing which initially assumed the form of Lieutenant Commander Les Erskine; leader of an American military team sent to investigate U.S. Outpost 31. The creature appeared in the 1991-92 comic-book The Thing from Another World.

After radio contact is lost with Outpost 31 and a surveillance aircraft reports the camp on fire, Erskine and his squad are sent to investigate the situation. At the ruins, they encounter MacReady in the process of torching Thing remains. Suspecting that the surrounding corpses are evidence of a homicidal rampage, they cuff him and head for the extraction point; but not before one member of the seal team is infected by touching one of the Things. As the rescue helicopter arrives, the creature unexpectedly reveals itself and proceeds to kill most of the team and destroys the helicopter before being incinerated. Despite MacReady's insistence that they burn the bodies and wait for death, Erskine intends to carry out his orders to return with survivors and coerces MacReady into helping him drag two wounded men thirty kilometers to an Argentine research station (Campo del Sur). On the way, the pair get lost as a result of MacReady's deliberate misdirection and one of the injured men dies. As they threaten to kill eachother, the pair are rescued by an Argentine search party headed by Childs.

Despite MacReady's concerns, he and the other Americans are brought to an isolated part of the Argentinian base, where blood tests are carried out - revealing that one of the wounded is a Thing. Assimilating a man, it flees toward a nearby ice field. MacReady, Childs, Erskine and the Argentinians pursue it and destroy the creature with high explosives. Returning to the base, Erskine goes off to the communication shack to "report in" and MacReady suddenly realizes that Erskine was never actually tested. The two hurriedly follow him, only to find the comms crew dead, and the communication equipment destroyed. MacReady determines from the log that Erskine called an American submarine, and the two chase him down on a snowmobile. MacReady shoots Erskine with his rifle and hits him in the head, but the wound has no effect. Seconds later, the submarine emerges from underneath the ice, and with its cover blown, the Erskine-Thing becomes completely inhuman, breaks into the submarine and begins slaughtering its crew. Trapped on-board, MacReady and Childs begin making their way to the crippled submarine's escape pod, but the Erskine-Thing attacks them on the way, and begins assimilating the surviving crewmembers. In a last-ditch effort to drown and kill the Erskine-Thing, Childs blows the submarine's exterior hatch.

Despite Childs's efforts, the Erskine-Thing escaped from the submarine, assimilating Childs himself and a sea lion as it made its way to the surface. An unidentified Argentinian (likely Dr. Deseado or Cruz) then attempts to help the sea lion, unaware that it's being absorbed into the Erskine-Thing, which then attacks and assimiliates the Argentinian.

What happened to the Erskine-Thing after this point is uncertain, though it likely became the Deseado-Thing, Cruz-Thing or Childs-Thing, meaning it was almost certainly destroyed during the events of Climate of Fear.

In the 1993/94 comic series Thing From Another World: Eternal Vows, it is explained that part of the Erskine-Thing breaks off from the rest of creature's body and becomes a fish, which is then caught by the American fishing boat, the Gettysburg, and assimilates one of its crew. 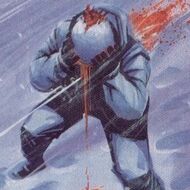 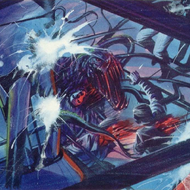 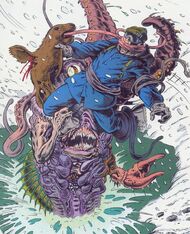 The Erskine-Thing assimilates an Argentine rescuer. As seen in Climate of Fear, Issue 1.
Add a photo to this gallery
Retrieved from "https://thething.fandom.com/wiki/Erskine-Thing?oldid=10125"
Community content is available under CC-BY-SA unless otherwise noted.