The Deseado-Thing was a Thing which initially assumed the form of Dr. Deseado; an Argentine researcher stationed at the Tierra del Fuego military base. It quickly absorbed two further individuals - Fuente and Soto. The creature appeared in the 1992 comic-book The Thing from Another World: Climate of Fear.

Dr. Deseado, the head scientist at the Tierra del Fuego research station, became infected by the Thing at an unspecified point, and is one of two likely candidates (the other being Cruz) who was attacked and assimilated by the Erskine-Thing at the start of Climate of Fear. After being shot dead by Cruz in defence of Sgt. Agapito Quitana, the base's commander, Deseado is buried in a shallow grave. If Deseado was not already infected, his corpse was likely infected by Cruz when being buried, and re-animated shortly thereafter. Regardless, the Deseado-Thing broke out of its grave, and then attacked two guards, Fuente and Soto, embedding its hands into their faces and absorbing them into its body, which likely accounts for the Thing's huge proportions when next seen.

The Deaseado-Thing then retreated to a nearby hangar and began assembling an escape craft, only to be inadvertently cornered by the base's personnel, who were searching for the escaped R.J. MacReady. It fought back, killing one of the soldiers, but MacReady then arrived with a flamethrower, which he used to kill the Thing. However, an unexpected complication arose. Due to the Deseado-Thing's size, the fire was not able to completely destroy its body at a fast enough speed. As a result, the surviving tissue was able to re-form itself into a new body, the upper half of which resembled a primate and the lower half a goat or sheep, which erupted from the dying body of the main Deseado-Thing. This smaller Thing tried to escape through the jungle, but was caught and subjected to more flamethrower blasts by a U.S. Navy team lead by Childs, putting an end to the Deseado-Thing once and for all. 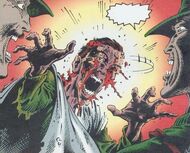 The Deseado-Thing attacks Fuente and Soto. As seen in Climate of Fear, Issue 2. 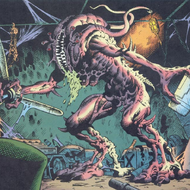 The soldiers stumble across the Deseado-Thing's first form. As seen in Climate of Fear, Issue 2. 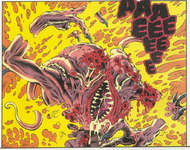 The Deseado-Thing burning, as seen in Issue 2.

The Deseado-Thing bursting out of its old body, as seen in Issue 2. 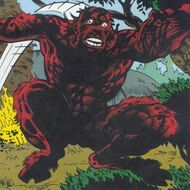 The final form of the Deseado-Thing flees. As seen in Climate of Fear, Issue 2.
Add a photo to this gallery

Retrieved from "https://thething.fandom.com/wiki/Deseado-Thing?oldid=10913"
Community content is available under CC-BY-SA unless otherwise noted.