Deceased, impaled with a tentacle by Edvard-Thing

"What the fuck is this shit, man?!"
― Derek, after witnessing the Centipede-Thing attack Jonas

Derek Jameson was an American helicopter co-pilot temporarily stationed at the Norwegian research station, Thule Station. The character appeared in the 2011 film The Thing and was portrayed by actor Adewale Akinnuoye-Agbaje.

Jameson was part of the three-man Sea King helicopter crew (along with pilot Sam Carter and crewman Griggs) which transports Dr. Sander Halvorson's research team to the Thule Antarctic research station. Initially left in the dark about the Norwegians' discovery, Jameson and the helicopter crew are present at the celebratory party and Halvorson's revelation that they have unearthed an extraterrestrial creature. During the party Jameson slips away to get a glimpse of the frozen Creature in the ice. After being deliberately spooked by the station's second-in-command, Peder, Derek prepares to leave the room - only to witness The Thing bursting from the ice and escaping through the ceiling. Derek frantically reports the news to the Norwegians and a search team is organized to hunt down the creature - resulting in the Thing being incinerated in one of the facility's wooden huts. Following the chaos, Derek prepares to leave for McMurdo Station along with Carter and Griggs, in order to get medical treatment for the severely traumatized Olav. However, they are flagged down by palaeontologist Kate Lloyd, who has discovered evidence that someone has been assimilated and replicated by The Thing. As they prepare to descend, the Griggs-Thing violently reveals itself, causing the helicopter to spin out of control and crash in the mountains.

Following the crash, Carter and Jameson are left for dead by the crew of Thule station due to the inaccessibility of the crash-site and the low likelihood of survival. However, later the pair return to Thule - emerging unexpectedly from the snow-storm, nearly frozen to death. Although several members of the group are convinced that the two Americans are Things and should be burned immediately, Kate convinces the group to lock them in the tool-shed and await the development of a blood-test. Isolated from the group, they tunnel under their prison and ambush one (Lars) of the two men sent to retrieve them for testing. The pair then break into the main building armed with Lars' flamethrower and initiate a tense stand-off which results in the death of Peder and the incapacitation of Thule Station commander, Edvard Wolner. The unconscious Edvard is then brought to the station's rec room where he is unexpectedly revealed to be a Thing. After Carter's flamethrower experiences a malfunction Derek opens fire on the transforming Edvard-Thing with a Walther P38 pistol. Enraged, the Edvard-Thing stabs a whip-like tentacle through Derek's chest, after which it forcefully assimilates American researcher Adam Finch and escapes. In the aftermath Carter sombrely comforts Derek as he dies. His body is then burned by Kate to prevent assimilation. 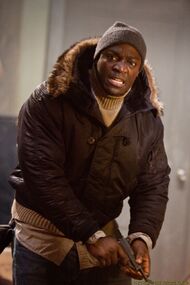 Promotional photograph of Adewale Akinnuoye-Agbaje as Derek Jameson, The Thing (2011).

Jameson reacts to being spooked by Peder in the ice-block room, The Thing (2011). 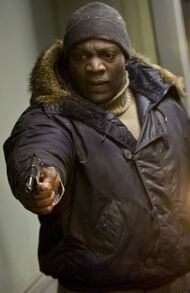 Promotional photograph of Adewale Akinnuoye-Agbaje as Derek Jameson, The Thing (2011).
Add a photo to this gallery

Retrieved from "https://thething.fandom.com/wiki/Derek_Jameson?oldid=12907"
Community content is available under CC-BY-SA unless otherwise noted.