The Cloud B4 carrier (also known as Whitley-Thing) is a massive Thing Beast created from Colonel Whitley through the use of the experimental Cloud virus. It served as the fourth and final boss of the 2002 video game The Thing.

It takes the form of a towering monstrosity. At the middle and lower parts it has several protruding tentacles. At the top it has multiple arachnid-like legs and a fanged, gap-like mouth at the center. The only remaining part of Whitley is the head.

Shortly after Whitley's brief encounter with Blake, the former began to feel the side effect of the B4 Cloud Virus strain he had injected himself with earlier, and mutated into a massive creature. Luckily for Blake, a helicopter pilot (who is later revealed to be R.J. MacReady) assisted Blake in confronting the creature. Blake uses the helicopter's M60 mounted machine gun and used the nearby fuel drums to his advantage. With the creature finally destroyed, Blake escaped the Antarctic via helicopter.

The first main targets are the four fuel drums which are near the bottom of the boss. It may seem a little hard to hit them at first because the chopper swerves a lot. Nonetheless, as soon as you get all four of them the gun will turn upwards towards the upper torso of the Whitley-Thing. Here you will see that a long tentacle protrudes out of its body and then goes back in. That is its weak spot, keep on hitting it there and and soon it will be collapse and die. 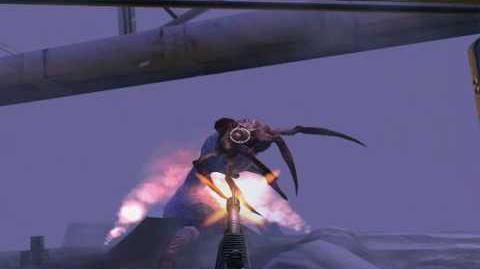