The Childs-Thing was a Thing which assumed the form of Childs, the former chief mechanic of U.S. Outpost 31. The creature appeared in the 1992 comic series The Thing From Another World: Climate of Fear.

Childs was evidently attacked and assimilated by the Erskine-Thing during its escape from the flooded submarine. His imitation was subsequently recovered by American forces who arrived to investigate the submarine's wreck.

While chasing the Deseado-Thing through the Argentine jungle, R.J. MacReady is surprised to see it incinerated by an American commando unit lead by Childs. MacReady leads them back to the Argentine base, where the Americans restrain the Argentinians for testing. MacReady is first to be tested, only for his blood to suddenly jump out of the dish when Childs applies a flame to it. He prepares to torch MacReady, but Dr. Viale argues with him, pointing out that MacReady was the one who tried to kill the Deseado-Thing. In the midst of the argument, MacReady uncovers the Cruz-Thing's identity and escapes in the subsequent chaos.

While hiding in the jungle, MacReady performs a makeshift test on himself to allay his own fears about possibly being a Thing. Meanwhile, the testing continues at the base, proving that Agapito Quitana, Dr. Viale and at least two others are not Things. The next-in-line to be tested then suddenly melts into a liquefied mass, which attacks and engulfs one of the Americans. Childs then torches the Liquid-Thing, though he burns down another hut in the process, much to the annoyance of the Argentinians. That night, Viale comes across MacReady, who attempts to prove that he is human. However, Childs shows up and admits that MacReady isn't a Thing... Childs himself is the Thing, and rapidly transforms into a monstrous form. MacReady and Dr. Viale are chased through the jungle by the Childs-Thing, who is quickly destroyed when they come across the second of the two American commando teams sent to the base. 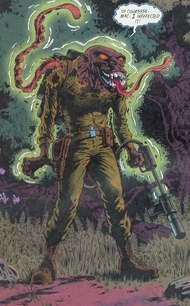 The Childs-Thing (Climate of Fear, Issue 4).
Add a photo to this gallery

Retrieved from "https://thething.fandom.com/wiki/Childs-Thing?oldid=10469"
Community content is available under CC-BY-SA unless otherwise noted.