The Centipede-Things were a pair of scuttling Things, formerly Edvard Wolner's arms, which split off from the Edvard-Thing. The creatures appeared in the 2011 film The Thing.

After he is injured by an exploding flamethrower fuel tank, Edvard Wolner is carried back to the rec room by Colin and Jonas, who grab each of Edvard's arms, with Jonas taking his left arm. As they cross the room, the Edvard-Thing's left arm detaches and clings to a now terrified Jonas's left hand and begins attacking him, its newly-formed limbs slicing into Jonas's flesh as it crawls up his arm. Jonas grabs it with his bare right hand in attempt to prevent it from smothering him, but the Centipede-Thing has considerable strength despite its small size, and it latches onto Jonas's mouth and begins the process of assimilating him.

The Edvard-Thing begins to mutate, its right arm splitting off and scuttling away. In the ensuing chaos, the Edvard-Thing kills Derek and successfully drags away a screaming Adam. As Kate arrives with a flamethrower, she spots Jonas, whose right arm is fused to the first Centipede-Thing, with its tentacles deeply embedded in his face. Kate incinerates him and the creature.

The second Centipede-Thing is later discovered clinging to a wall by Carter and Kate, the former splitting it with an axe, and the latter burning it as it attempted to merge its two halves.

Leg-Thing pre-production artwork for The Thing (2011). 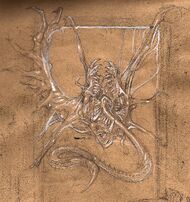 Leg-Thing pre-production artwork for The Thing (2011). 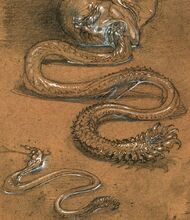 Centipede/Tongue-Thing concept artwork for The Thing (2011).

Retrieved from "https://thething.fandom.com/wiki/Centipede-Thing?oldid=12624"
Community content is available under CC-BY-SA unless otherwise noted.