Campo del Sur is an Argentine Antarctic research station which appears only in the 1991/92 comic series The Thing from Another World.

After rescuing U.S. Outpost 31 survivor Childs from the Antarctic wilderness, an Argentine search party comes across helicopter pilot R.J. MacReady and the remains of a U.S. Navy Seal team. The Americans are taken back to the Argentine station and are debriefed by its commanding officer, Colonel Palomo, who disarms the men and isolates them for blood testing. The tests reveal that one of the wounded is a shape-shifter, which escapes through the lab wall and flees toward a nearby ice field. MacReady, Childs, Erskine and the Argentinians pursue the creature and destroy the it with high explosives. Returning to the base, Erskine goes off to the communication shack to "report in" and MacReady suddenly realizes that Erskine was never actually tested. The two hurriedly follow him, only to find the comms crew dead, and the communication equipment destroyed. MacReady determines from the log that the Erskine-Thing called an American submarine, and the two chase him down on a snowmobile. 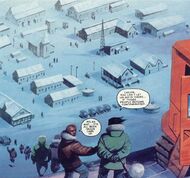 Exterior image, looking down on Camp del Sur, The Thing from Another World (Comic).

Interior image of the medical laboratory, The Thing from Another World (Comic). 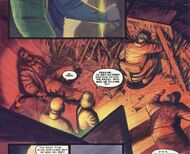 Interior image of the sabotaged radio room, The Thing from Another World (Comic).
Add a photo to this gallery
Retrieved from "https://thething.fandom.com/wiki/Campo_del_Sur?oldid=10254"
Community content is available under CC-BY-SA unless otherwise noted.