The Bell 206 Jetranger is a two-bladed, single-engined helicopter manufactured by Bell Helicopter. The 206 features prominently in the 1982 film The Thing as both the Norwegian and American helicopters. The aircraft also appears in the 2011 prequel film and the 2002 video-game of the same name.

in the closing scenes of The Thing (2011), following the destruction of the Thule Station, a Norwegian pilot named Matias lands his Bell 206 at the station, only to be confronted by Lars, who demands that he show him his tooth fillings at gunpoint.

Once Lars is convinced that Matias is human, they notice the station's Alaskan Malamute fleeing from the facility. Lars realizes that the Thing has assimilated the dog and the pair give chase in the helicopter, shooting at it from the air.

The Norwegian Bell 206 (with 'Norge', 'LKK' markings and Luftforsvaret insignia) first appears in the opening scenes of The Thing (1982), as its Norwegian crew attempt to hunt down and kill a shape-shifting alien organism (imitating an Alaskan Malamute). Shortly after landing at U.S. Outpost 31 the aircraft and its pilot are destroyed when one of the Norwegians accidentally drops a grenade alongside it.

U.S. Outpost 31 also operates a Bell 206, piloted primarily by R.J. MacReady (with 'US Antarctica Research Program', '452' markings and United States Air Force insignia). The helicopter is first used to investigate the ruins of the Norwegian Outpost, as MacReady and Dr. Copper transport the remains of a Split Face back for further studies. It is also used by MacReady, Palmer and Norris, as they travel to the UFO crash site. Mid-way through the film, the helicopter is sabotaged by Blair, who smashes it, the tractor and the radio beyond repair under the pretences of preventing the Thing from escaping. Components from the Bell were later salvaged by the Blair-Thing to construct a miniature UFO.

A military helicopter, strongly resembling the Bell 206, made an appearance in the 2002 video game sequel, where it deploys Bravo Team at the ruins of Outpost 31. The wreckage of MacReady's helicopter is also found. The helicopter later extracted Bravo Team following the successful demolition of the US Outpost and set them down at the Thule Station to assist Alpha Team. A different helicopter appeared again during the final level of the game piloted by Outpost 31's sole survivor - R.J. MacReady. Assisting Blake, the pair destroy a gargantuan Thing (the Cloud B4 carrier) and fly into the horizon.

The crew examine the helicopter wreckage, The Thing (1982).

MacReady and Norris navigate to the crash site, The Thing (1982). 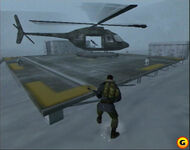 Militarized helicopter lands on a helipad, The Thing (video-game).
Add a photo to this gallery

Retrieved from "https://thething.fandom.com/wiki/Bell_206_Jetranger?oldid=10650"
Community content is available under CC-BY-SA unless otherwise noted.