Becomes part of the split-faced Thing

Deceased, assimilated by the Edvard-Thing

"BURN IT!"
― Adam's last words before being assimilated by the Edvard-Thing

Adam Finch was an American researcher and assistant to Dr. Sander Halvorson temporarily stationed at the Norwegian Antarctic research station, Thule Station. The character appears in the 2011 film The Thing and was portrayed by actor Eric Christian Olsen.

After Norwegian researchers discover an extraterrestrial and its spacecraft buried in the Antarctic, Adam along with his boss, Dr. Sander Halvorson, seek out American palaeontologist Kate Lloyd to extract the creature from the ice. Kate, at first hesitant about going to Antarctica with such little information, was soon convinced by Adam to lend her excavating skills, due to their long-standing friendship.

Upon arriving at Thule Station they are brought to the crash site, where they are amazed and shocked by the gravity of the discovery. They extract the creature in a single block of ice and return to the outpost to celebrate their accomplishment. However, due to Dr. Halvorson's carelessness the (very much alive) creature escapes its icy prison, and goes on a rampage; managing to kill the station's Alaskan malamute and a member of the research team before being incinerated. Its burnt corpse - along with Henrik's partially-digested remains - are subsequently autopsied by Halvorson, Adam and Kate. To Kate's horror and Halvorson's fascination, they find that Henrik was in the process of being absorbed (and replicated) by the organism; with a metal plate used to set one of the man's bones now outside his body.

Following the autopsy, Kate takes a sample of Henrik's tissue for further analysis and watching through a microscope, she discovers the Thing's cells predating on Henrik's remaining tissue, consuming it and then imitating it. Based on this discovery and the autopsy, Kate hypothesizes that the thing might be a shape-shifter, able to imitate its prey after consuming it. Kate shares her discovery and observations with Adam who, still shaken by the events of the previous night, was unable to confirm or deny her conclusions.

Shortly thereafter, an imitation of Griggs reveals itself on-board a departing helicopter, causing it to crash during the ensuing chaos. Unable to contact the outside world due to an oncoming storm, station commander Edvard Wolner prepares to travel to a nearby research station for help. Kate, fearful that one or more of the group may be impostors, attempts to prevent the men from leaving and shares her hypothesis. Increasingly impatient with the palaeontologist's apparent hysteria, Edvard and Halvorson accuse Kate of paranoia and Adam, when questioned about her observations of the Thing's cellular activity, is uncertain. As a result, few of the scientists are willing to listen to her and they continue with their plan.

After the Juliette-Thing rampages through the station, the group (including Adam) now become convinced of her sanity and they set about quarantining the facility and burning the Thing's remains. Halvorson offers to develop a blood serum test to determine if a person is an imitation by mixing a suspect's blood with a pure blood sample and observing the reaction. However, the lab bursts into flames shortly after Halvorson and Adam begin working on their project, leaving no chance for the test's implementation. Tempers flare immediately, with both Adam and Halvorson being accused of sabotaging the lab. Attempting to restore order, Kate improvises a simpler, if less certain test - examining the team for metal tooth-fillings which the organism cannot imitate. She eventually narrows down the number of suspected Things to Colin, Halvorson, Edvard, and Adam - the latter of whom complains that the test is unfair to those of the team (such as himself) who have good oral hygiene.

As paranoia breaks out, there is an altercation which results in a flamethrower fuel tank explosion, throwing Edvard against the wall. As they carry the injured man back to the rec room, the Edvard-Thing transforms, killing Jonas and Derek before incapacitating Adam with a stabbing blow from its whip-like tentacle. As the wounded American lies on the floor and screams for help, the Edvard-Thing pins him down and slowly merges its face with his to become the split-faced Thing. Kate attempts to incinerate the creature, but is unable to and watches as it drags away the now limp Adam to be fully assimilated elsewhere. 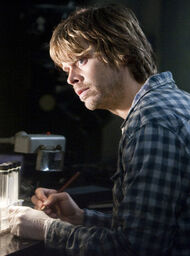 Adam working on the blood test.

Add a photo to this gallery
Retrieved from "https://thething.fandom.com/wiki/Adam_Finch?oldid=13075"
Community content is available under CC-BY-SA unless otherwise noted.